The right medium in the storage tank?

According to the Federal Statistical Office of Germany, the average price of diesel for end consumers rose by more than 18 percent from 2016 to 2019. Consequently, it would be useful for service station operators to think proactively about fuel storage to increase profitability. A rather rare but nevertheless real danger is when water makes its way into a vehicle's fuel tank during completely normal refueling. A level solution from JUMO solves this problem.

How is it possible for a mixture of water and diesel to come out of the fuel pump at the filling station? In recent years, water has repeatedly penetrated and contaminated underground diesel or gasoline tanks, especially during heavy rainfall. Engines do not take well to this at all. The engine may start for a brief time because the 2 fluids do not mix and a certain amount of diesel is left in the injection system. But the driver of this vehicle will not get far. That it because the water sinks to the bottom of the tank and is therefore sucked through the pump first. This can lead to significant damage. The entire fuel system must be cleaned and filters must be replaced.
To prevent this from happening, a diesel tank system manufacturer commissioned JUMO to find an overall solution. In a diesel tank the level should be measured continuously so that messages for refilling can be sent and pump control can be implemented. At the same time, point level measurement should be used to detect possible water ingress.

The solution implemented by JUMO is based on a combination of products from the JUMO NESOS range. A float switch and level transmitter were integrated into one product so that installation is only possible via a tank opening. In addition, the product series has the necessary approvals for potentially explosive areas.

The float switch is useful for the varying density of water and diesel fuel. It is designed to float on the interface between water and diesel, as a result of which an alarm message is possible. The JUMO NESOS combined sensor is designed specifically for application in diesel tanks with its overall length of over 4 meters. Level measurement enables service station operators to determine the actual level of diesel and the average consumption, which helps them to proactively and economically plan for demand.

Moreover, JUMO NESOS level measuring transformers provide a virtually continuous standard signal from
4 to 20 mA within a temperature range of -52 to +180 °C. The dissolution amounts to 5.5 mm. Variants with Pt100 or Pt1000 temperature sensors as well as with temperature switches, temperature transmitters, and displays are available as optional extras.

Complete plant control can be implemented with the scalable JUMO mTRON T measuring, control, and automation system. The modular component concept combines variable I/O modules with powerful control panels. It is just as impressive in the area of measured value recording as it is for complex control tasks and sophisticated automation solutions. Extremely high-quality universal analog inputs for a wide range of input variables and the JUMO control algorithm that has been proven over the years ensure a high degree of process reliability and the greatest possible transparency. A digital input module is used for the necessary online alerts. As a result, the user can receive information via email on their smartphone.

The JUMO diraVIEW digital indicator directly reports malfunctions on the tank. The basic device of this series is already equipped with 1 analog input, 2 binary inputs, 2 relay outputs, 2 logic outputs, and a voltage supply for two-wire transformers. 3 extension slots can be equipped with additional inputs and outputs as well as with interfaces. Alarm texts are particularly easy to notice due to the color change from green to red.

Digital indicators of the JUMO diraVIEW series in different formats

The level monitoring was implemented as specified. The combined solution of float switch and level transmitter from the JUMO NESOS series ensures precise point and contiuous level measurement. It signals when it is time to fill up and alarms if water should enter the tank. An online alarm is triggered through the JUMO mTRON T measurement, control and automation system, which also controls the pumps. Also, color coded alarm texts are displayed directly on the tank via the digital display of the JUMO diraVIEW indicator.

Some components of the solution 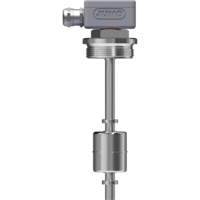 We have solutions in measurement and control technology which are used in many different machines and plants.
All applications

Exchange ideas with us!